Do you want your club(s) spine aligned?

Add $29 for Irons to be spine aligned.

All clubs are made to a 7 iron length!
IMPROVE YOUR IRON PLAY! 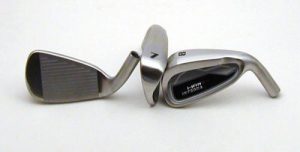 We have had lots of golfers over the years ask for single length irons, and we’ve always had to say no.  (You can’t just “cut down” a traditional set of irons…… Since a traditional 3 iron head weights about 245 grams, a 5 iron about 259 grams, a 7 iron about 272 grams, 9 iron about 287 grams, PW @ 297 grams,,,,, if you cut down the longer clubs to a 7 iron length, then those clubs become way too light, and the shafts too stiff.  And the shorter clubs like the 9 and PW would be too heavy….. Long story short, while you are trying to improve consistency, you would make it worse… and would have no consistency because of the weight factor…. and performance would be awful.  Also the lie angles would be all messed up.  For the long irons, the heel would be up in the air, and the short irons, the toe would be up in the air.)

The purpose of a single length iron set is to promote a more consistent swing, and eliminate your having to make stance, ball position, and swing plane adjustments per club as the club gets longer (or shorter).  Golf is one heck of a complicated game….. This change can make the game a bit simpler and less complicated. The single length irons will very probably improve the consistency of your iron play, and lead to better ball striking throughout your iron set, and which ultimately should lead to lower scores (and more fun on the golf course.)

Moe Norman (Of Natural Golf Fame, and in the Canadian Hall of Fame, and known as one of the best ball strikers in the history of golf) played with single length irons for many years.

Bobby Jones, the only player to win all the majors in one year, used single length irons.

Bryson DeChambeau won the 2015 NCAA Individual Championship, and the 2015 U.S. Amateur, (the 5th player in history to win both in the same year)  He turned pro after playing in the Masters as an amateur.  He plays single length irons.  Keep your eye on this rising star.

Tommy Armour Golf used to make the EQL irons (EQL standing for Equal Length irons…) Where the 3-6 were one length, and the 7-PW were another length.

These irons are available Right Handed only.

Available in the 5-PW, gap wedge and sand wedge.

Add $30 per club for a Gap Wedge and/or Sand Wedge with a steel shaft.

Add $40 per club for a Gap Wedge and/or Sand Wedge with a graphite shaft.

$45 steel shaft when bought with the Single Length Iron Set.  $55 if purchased individually.

$55 graphite shaft when bought with the Single Length Iron Set.  $65 if purchased individually.